The DC Sustainable Energy Utility (DCSEU) has partnered with Great Streets to help their grantees save money and make their grants go further by becoming more energy-efficient.

Restaurants throughout the nation’s capital are finding it difficult to stay afloat with rising rents and increased competition. According to DC Eater, roughly 90 restaurants closed in the DC-area between 2018 and 2019 alone. However, there is a program that is offering hope to small business owners in the District.

Great Streets, a DC government program designed to boost local business development, distributes grants of up to $50,000 to qualified small business owners each year. This money helps small businesses buy new equipment and make improvements to draw more customers. Between 2015 and 2018, nearly half of the awarded grants went to businesses in the food industry.

The DC Sustainable Energy Utility (DCSEU) has partnered with Great Streets to help their grantees save money and make their grants go further by becoming more energy-efficient. This is especially important for local restaurants, which according to the EPA and ENERGY STAR® typically use about 2.5 times more energy than typical commercial spaces.

“In a business, if you generate an extra dollar of sales, it’s like 10, 15 cents of profit, right?,” said Che Ruddell-Tabisola, co-owner of BBQ Bus Smokehouse and a 2018 Great Streets awardee. “But if you save a dollar, you’re saving that whole dollar. Anything that we can do, especially on those monthly expenses, really adds up.”

Ruddell-Tabisola opened BBQ Bus Smokehouse in Brightwood with his husband, Tadd, in 2017. Last year, they received a Great Streets grant to help with the expense of going from a food truck to a brick and mortar shop. This allows him to work with food delivery apps, which is now a very large component of his business. 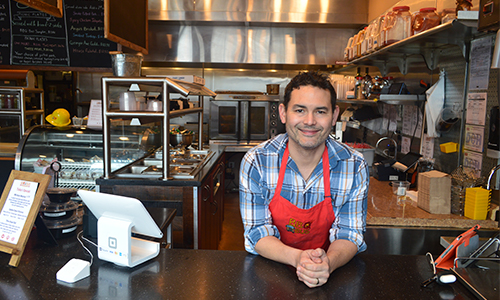 With his Great Streets grant money and rebates from the DCSEU, Ruddell-Tabisola was able to buy a new hot water heater and HVAC system for his shop.

“It was sweltering hot here in the summer and it was freezing in the winter,” said Ruddell-Tabisola. “So [the HVAC system] was one of our biggest needs.”

He says this has helped him save on his monthly utility bills while making his staff more comfortable.

Mike Koritko, owner of gluten-free Rise Bakery in Adams Morgan, received a Great Streets grant in 2018. He opened his bakery in 2011 after being diagnosed with Celiac Disease.

“The grant was really great because it seems like I’m constantly doing little renovations to this place,” said Koritko. “It’s so small and we do so much out of here. We try to maximize every inch, so it really helped.”

Koritko used part of his grant money to increase his kitchen space and to make improvements to his store front. He worked with the DCSEU to receive rebates for installing a new efficient air conditioner and efficient tankless water heater. He says his staff are not only cooler, but he has been able to save 20% off his utility bills each month. 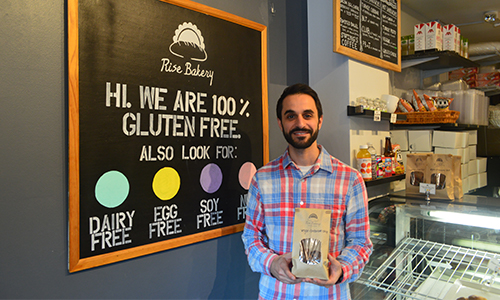 “Saving money on my electric bill, which is definitely my greatest bill, and getting incentives to do it, is like a no-brainer,” said Koritko.

He also used the Great Streets grant money to buy a new panini press, which has helped his business grow.

“Our sandwiches are now our biggest seller in the entire bakery—more than any pastry at this point,” said Koritko.

Koritko and Ruddell-Tabisola are both grateful to Great Streets and the DCSEU for helping them to improve their businesses.

“We talk all the time in this town about affordable housing, but we don’t spend enough time talking about keeping the costs of doing business affordable,” said Ruddell-Tabisola.