Civil society leaders from the US and Europe met in Washington, DC to explore and discuss the future of energy through a tour organized by the Ecologic Institute in the US in early June. The tour’s first stop: the DCSEU.

Civil society leaders from the US and Europe met in Washington, DC to explore and discuss the future of energy through a tour organized by the Ecologic Institute in the US in early June. During the four day visit, the tour explored the local, regional and federal efforts in energy and the environment in the District of Columbia. The tour’s first stop: the DCSEU.

At the DCSEU, the diverse group which included participants from countries such as the US, Germany, France and Italy learned about the history of energy production in the District from DCSEU Managing Director Ted Trabue, and of course, about the DCSEU itself. The participants, who are leaders in a variety of industries such as renewable energy financing, energy efficiency implementation and community resilience, fostered an insightful conversation. Leading questions were right along the lines of the DCSEU’s mission to create a brighter and more inclusive energy and environmental future for the District. For example, discussion points were how DC balances energy demand for commercial and residential customers, what innovative ideas are on the table to improve energy services and reduce the city’s footprint, and how the District addresses its large income inequality through energy efficiency and renewable energy. 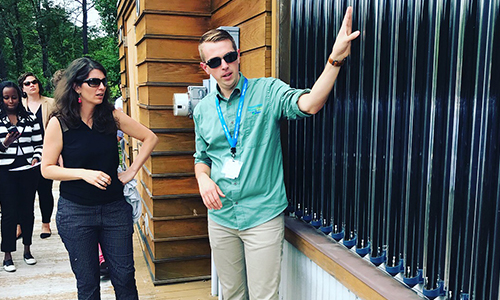 “The group had very diverse backgrounds and views, and it was great to see how the transatlantic dialogue was inspired, and how the DCSEU model fits in”, said Ted Trabue, Managing Director of the DCSEU.

After the kickoff at the DCSEU’s offices the group also visited PEPCO’s Watershed Sustainability Center, attended ACEEE’s International Symposium for Energy Efficiency, learned more about Nixon Peabody’s Community Solar Installation, spoke with the Department of Energy and Environment (DOEE), which also administers the DCSEU, and met with representatives of the National Renewable Energy Laboratory and the Natural Resources Defense Council (NRDC).

"Visiting the DCSEU and meeting with their team was a great start into discovering DC's energy future!”, said Max Gruenig, President of the Ecologic Institute in the US.

The program was organized by the Ecologic Institute and funded by the European Union Delegation in the United States. It is part of the ongoing Energy Future Exchange (EFEX), more at http://energyfuturex.org/